Indianapolis – John Griswold, Professional Driver with XPO Logistics, was awarded Grand Champion at the 2018 Indiana Truck Driving Championships held on Saturday, June 30, 2018 at the Indiana State Fairgrounds. This year 152 drivers from across the state of Indiana competed for the title of Grand Champion. John will be competing in the American Trucking Associations’ National Truck Driving Championships August 15-18, 2018 in Columbus, OH along with 450 top professional drivers from across the United States.

John has achieved over five million lifetime safe driving miles during his 41 years of driving. He has competed in the IMTA’s Truck Driving Championships 20 times and this year makes his fourth 1st place wins in his competing classes. This is his first year as Grand Champion.

John resides in Zionsville, IN and is married to Theresia. They have three children, Bryan, Andrew and Aaron.

The Indiana Truck Driving Championships is a competition of professional truck drivers hosted each year by the Indiana Motor Truck Association’s Safety and Maintenance Council. There are nine classes of competition, all of which include course driving tests that require intricate and precise maneuvers. The drivers are judged based on driving skills within specific time constraints. The course problems are designed to simulate conditions encountered in actual truck operations on the streets and highways. In addition to driving skills, each driver performs a pre-trip inspection of equipment and is also graded on a written test which includes questions related to safety rules and regulations of the trucking industry.
June 17, 2018
Mike Clark Named Indiana Motor Truck Association (IMTA) Technician “Grand Champion”

The Indiana Technician Championships is a competition of professional technicians hosted each year by the association’s Safety and Maintenance Council. The competition features a written test followed by eight hands-on skills challenges that include PMI, Engines, Tires & Wheels, Service Information, Fasteners, Electrical, Brakes, and Ohm/Volt.
November 10, 2017
New ATRI Research Provides Clear Guidance on Infrastructure Investment
Indianapolis, IN - The American Transportation Research Institute (ATRI) today released its assessment of the nation’s transportation investment options. The report entitled A Framework for Infrastructure Funding concludes that the only meaningful mechanism for attaining the administration’s vision for a large-scale infrastructure program is through a federal fuel tax increase. The inefficiency of other mechanisms, including mileage-based user fees and increased tolling, will fall far short of the needed revenue stream without placing undue hardship on system users.

In addition, ATRI’s research documents that a federal fuel tax increase will incentivize states like Indiana to generate multi-million dollar matches to the new federal funds, ultimately moving the United States closer to the infrastructure investment goals proposed by both Congress and the President.

“ATRI’s study makes a clear case for increasing the federal fuel tax as the most efficient means for delivering transportation infrastructure revenue,” said Philip Hammel, COO at Carter Logistics LLC. “But just as critical for Indiana is the associated job growth – projected to be 11,387 jobs – that would result from increased federal and state infrastructure spending.”

The report further documents the consequences of continuing with the “do-nothing” option. The federal fuel tax has not been raised in more than two decades, resulting in significant costs to system users, particularly the trucking industry. While the trucking industry contributes more than $18 billion in federal user fees each year, growing traffic congestion and freight bottlenecks now cost the industry more than $63 billion annually. The report also indicates that growth of e-commerce will likely slow as freight deliveries fail to meet the real-time demands of U.S. consumers.

Other key ATRI findings and recommendations include:
• A newly created federal vehicle registration fee would be the most efficient mechanism to fill funding gaps associated with electric vehicle use. These fees
could be seamlessly implemented using the same systems as those successfully used to collect state registration fees.

• A bureaucracy as large as the IRS would be required to collect, manage and enforce a national vehicle miles traveled (VMT) tax on the more than 250 million vehicles registered in the U.S. Additionally, mileage tax evasion would likely skyrocket under a program that can’t “see” non-paying users.

• The practice of road tolling continues to be an expensive proposition for collecting highway funds. While several toll systems slightly improved their administrative efficiency, the majority of toll systems spend more than ten cents of every dollar collected on administrative activities. Many systems are losing money, and almost all privatized toll roads in the U.S. have filed bankruptcy. Finally, ATRI’s analysis found that many toll authorities have modified their public financial statements to increase complexity and decrease transparency of revenue management – which ultimately masks the inefficiency of toll roads.

• According to the literature and public polling data, American tax payers prefer a federal fuel tax over other funding mechanisms when the revenue is dedicated to transportation infrastructure.

You can download the full report from ATRI”s website at www.truckingresearch.org.
ATRI is the trucking industry's 501(c)(3) not-for-profit research organization. It is engaged in critical research relating to freight transportation's essential role in maintaining a safe, secure and efficient transportation system.
August 23, 2017

The Indiana state legislature approved diesel fuel tax increases during the 2017 session. Those increases became effective July 1. The IFTA tables had not yet been updated on July 1st which presented an inaccurate picture of Indiana Refundable Taxes compared to surrounding states, negatively affecting fuel purchases in Indiana.

The tables have been updated and an accurate picture is now available. The summary below will help to clarify the current situation.

On July 1, 2017, the state of Indiana implemented a new diesel fuel tax program.

The essence of the program was to combine three existing taxes, plus provide for a $0.10 per gallon increase on both special fuel (diesel) and the diesel surcharge for a total of a $.20/gallon increase.

The net effect of this change was to increase the taxes at the pump by $0.31 - to a total of $0.47. This is a combination of: At the same time, Indiana changed its Refundable Tax from $0.16 to $0.47 - thereby making this a cost neutral tax relative to surrounding states.

The change occurred so late in June that Indiana was unable to get the changes to IFTA in time to be displayed properly in the IFTA tables. This sent confusion through the trucking community as the pump price had gone up in response to the new taxes by $0.31, but the tax in IFTA remained the same, including the Refundable Tax at $0.16.

Many carriers elected to buy fuel in neighboring states due to the confusion of the tax implementation. Officials from the state of Indiana recognized the problem and responded by getting the corrected taxes to IFTA in early August.

Now the Indiana tax and the IFTA tax tables are aligned.

Indiana remains an attractive state to purchase diesel fuel. Motor carriers need to ensure that they are now correctly accounting for the new tax as well as the new Refundable tax in their fuel buying decision making process. 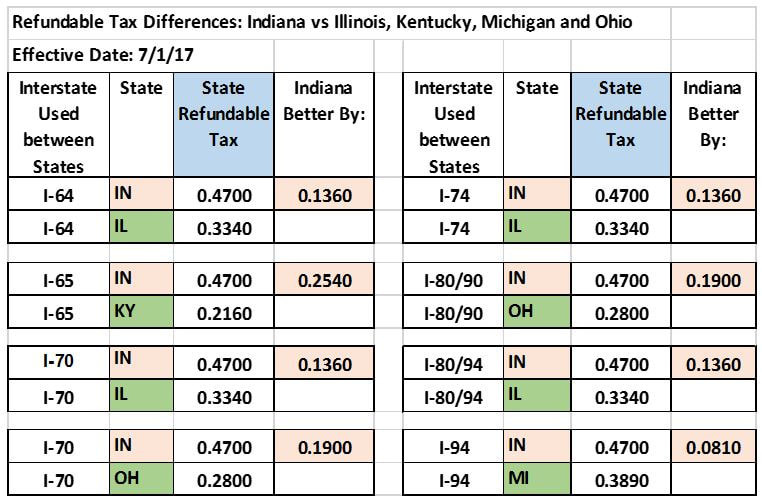 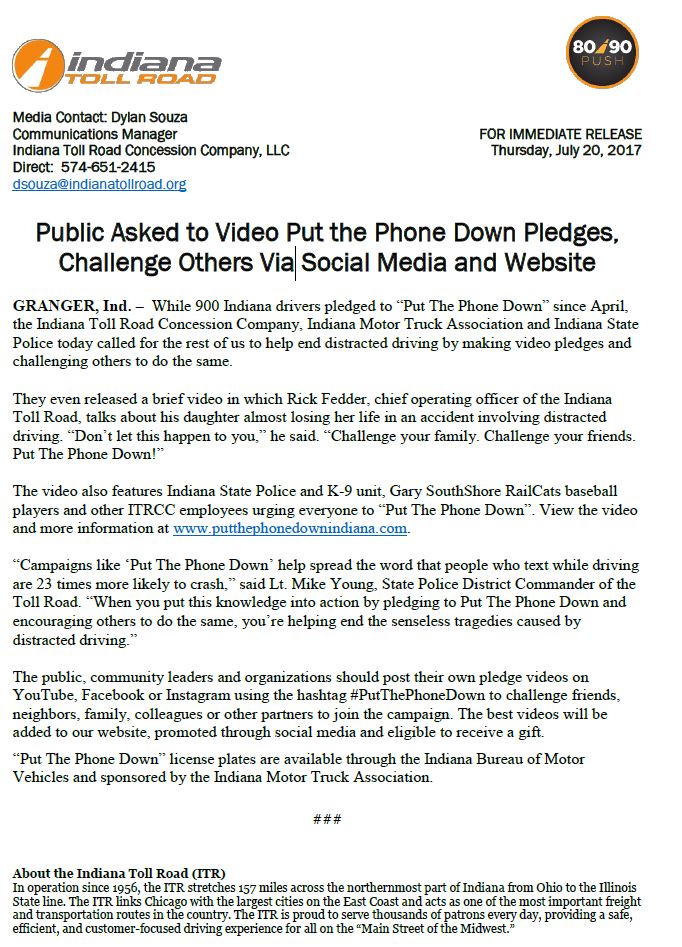 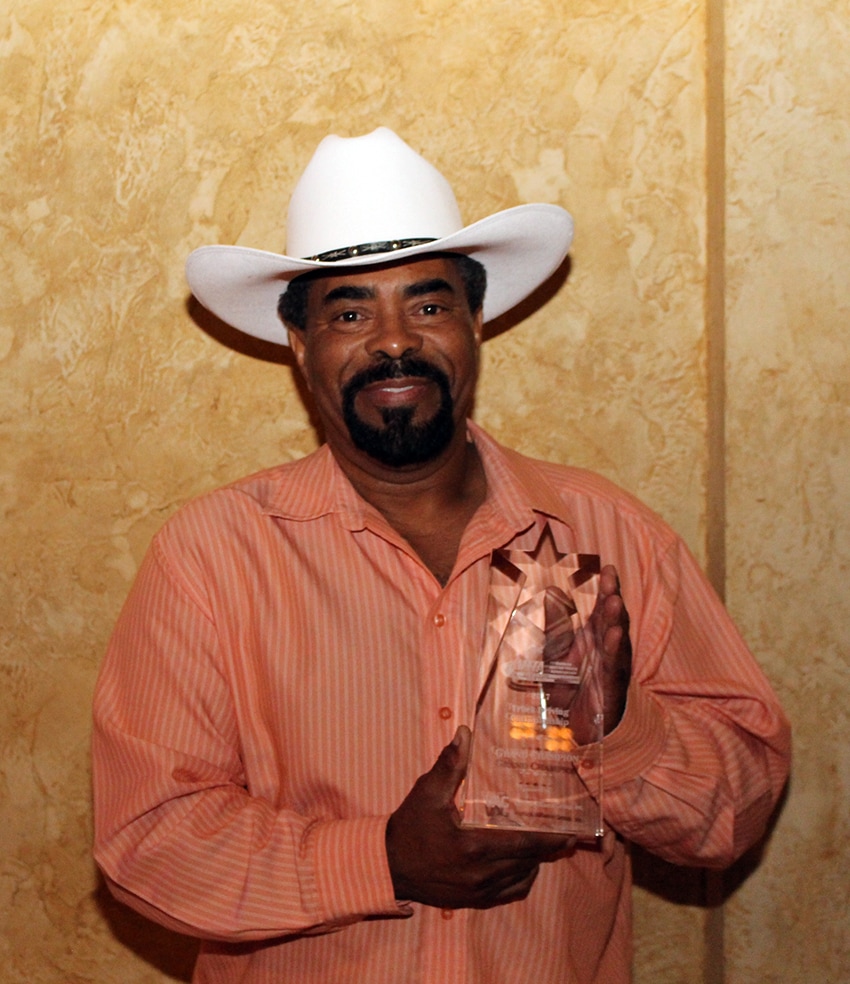 Indianapolis – Eric Fuqua, Professional Driver with FedEx Ground, was awarded Grand Champion at the 2017 Indiana Truck Driving Championships held on June 3, 2017 at Lincoln College of Technology.   This year 163 drivers competed for the title of Grand Champion.  Eric will be competing in the American Trucking Associations’ National Truck Driving Championships August 9-12, 2017 in Orlando, Florida along with 450 top professional drivers from across the United States.

Eric has achieved over one million lifetime safe driving miles during his 39 years in the trucking industry.  He has competed in the IMTA’s Truck Driving Championships 10 times previously; this is his first Grand Champion award.
​
Eric resides in Zionsville, IN and has three children, Eric Jr, Sean, and Nathan.
The Indiana Truck Driving Championships is a competition of professional truck drivers hosted each year by the Indiana Motor Truck Association’s Safety and Maintenance Council.  There are nine classes of competition, all of which include course driving tests that require intricate and precise maneuvers.  The drivers are judged based on driving skills within specific time constraints.  The course problems are designed to simulate conditions encountered in actual truck operations on the streets and highways.  In addition to driving skills, each driver is graded on a written test which includes questions related to safety rules and regulations of the trucking industry.
​FOR IMMEDIATE RELEASE
June 9, 2017 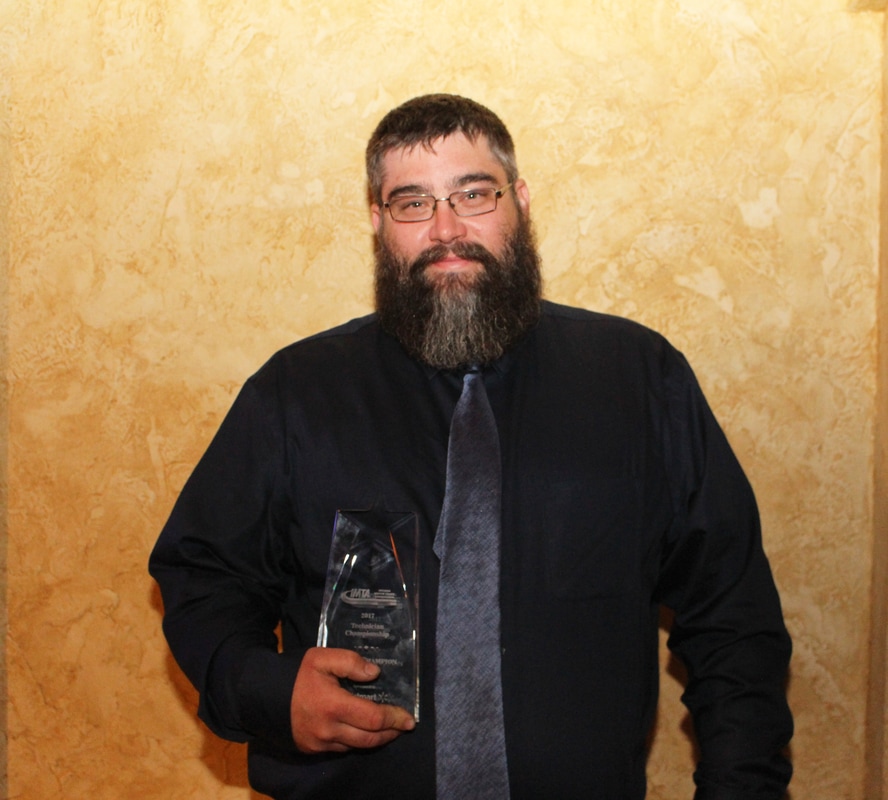 Indianapolis – Henry Totten, Wiers International was awarded Grand Champion at the 2017 Indiana Technician Championships held on June 3, 2017 at Lincoln College of Technology. This is back to back Grand Champion titles for Henry.  This year 39 technicians competed for the title of Grand Champion.  Henry will be competing in American Trucking Association’s Technology & Maintenance Council’s National Technician Skills Competition September 16-19, 2017 in Orlando, FL.

Henry has been a technician for over fifteen years. He has spent the last 11 years with the Wiers organization, and is currently a Senior Technician.   He resides in Monticello, Indiana with his wife Lindsey, and four sons.

The Indiana Technician Championships is a competition of professional technicians hosted each year by the association’s Safety and Maintenance Council.  The competition features a written test followed by nine hands-on skills challenges that include PMI, Engines, Tires & Wheels, Service Information, Fasteners, Electrical, Brakes, Ohm/Volt, and Fifth Wheel.
FOR IMMEDIATE RELEASE
March 10, 2017
IndyFoodDrop.org launches with help from four of the city’s largest food hunger-relief agencies in an effort to save food and help feed hungry Hoosiers

Indianapolis – Midwest Food Bank along with three other of Indianapolis’ largest hunger-relief agencies collaborated on the launch of a new website, IndyFoodDrop.org, designed to help the trucking industry redirect any rejected food by local grocers and distributors from going into dumpsters and landfills, into the hands of people in need. By harnessing the power, people and resources of Midwest Food Bank, Gleaners Food Bank, Second Helpings and St. Vincent de Paul Food Pantry, truck drivers and brokers now have an easy way to get any rejected food items unloaded so they can get their trucks back on the road quickly – all while helping hundreds of families in need. The agencies partnered with the Indiana Motor Truck Association on this new initiative.

John Whitaker, executive director of Midwest Food Bank in Indianapolis, acknowledged the food is still fit for human consumption, just not for sale.

“We know there are times when food is rejected by the food distribution channel due to improper food temperature of the truck, shifted or damaged boxes during transport, or bruising and browning of produce, yet it is still edible and nutritious,” said Whitaker. “When that happens it’s easier to head to the dumpster, throw away the food and get back on the road. Our goal is to mobilize the resources within the four partnering organizations to quickly and efficiently transfer food that may have otherwise been thrown away into the food recovery system.”

IndyFoodDrop.org clearly and succinctly provides drivers with access and information to change their food disposal process. Rather than dumping rejected food, drivers can now head to one of the four food hunger-relief agencies where they will receive help unloading their truck, a tax-deductible receipt and the benefit of knowing they are helping the hungry through a coordinated food recovery effort.

“This is a natural partnership for us to help get the word out about this website to our industry, and a great opportunity for the Indiana Motor Truck Association (IMTA) to make a difference in the fight against hunger,” said Barb Hunt, vice president, IMTA. “To know nutritious food that might otherwise get thrown away is in turn helping feed the hungry is truly rewarding.”
The Indiana Motor Truck Association is a highly respected association that strives to serve, represent and promote the interests of the trucking industry by enhancing its image, efficiency and productivity through its focus on safety and advocacy.  Founded in 1934, the IMTA has continuously offered safety programs through its Safety & Maintenance Council, including distracted driving education, advocacy at both the state and federal levels, networking opportunities and free consultation for its member.  For additional information, visit www.intrucking.org